You are here: Home / Fires/Accidents/Disasters / Iowa Red Cross volunteers head to Canada to help with wildfires 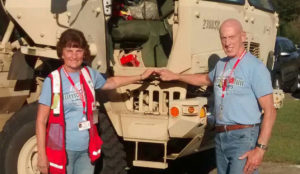 Four Iowans are among the Red Cross volunteers responding to the devastating wildfires sweeping across British Columbia.

Richard and Carolyn Newkirk, from Ankeny, are traveling to the Canadian province today. Carolyn says she and her husband are excited to be able to help.

“It’s a little bit nervous excitement, you know, because you wonder ‘OK, what is this going to be like?’ We have dealt with tornadoes, hurricanes, and floods. You have kind of an idea what you’re going to meet there, but this is kind of different,” Carolyn said. The Newkirks are both retired and will provide mental health counseling to wildfire victims.

“We understand that we’ll be dealing with people who have been forced out of their homes, they may have no damage yet, but they’ve been displaced. Then, we’ll be talking to people, as we understand it, who’ve probably lost everything,” Richard said. The Newkirks expect to be in the region for around two weeks. Speaking with wildfire victims who’ve lost their homes and belongings will take a toll on the counselors.

“There’s a term we use called ‘compassion fatigue.’ It does drain your emotions,” Richard said. “Luckily, my wife and I go together, which is a benefit a lot of mental health counselors don’t have. So, they go back to their motel room and don’t have too many people to talk to, but at least my wife and I can download to each other and kind of process the day’s activities.”

The British Columbia Wildfire Service reports this is their worst wildfire season on record. Currently, over 2.2 million acres have burned. At its peak earlier this summer, more than 45,000 people were displaced from their homes.