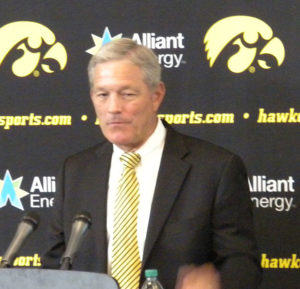 The Iowa Hawkeyes will be without their top cornerback when they open the season at home against Wyoming on September second. Coach Kirk Ferentz says sophomore Manny Rugamba has been suspended. The native of Illinois played in 12 games last year as a true freshman and started three.

“It is for a violation of team policy that took place in the out of season and will be enacted here in this first week”, said Ferentz. “We will move on after that. He will be welcomed back with normal status after serving a one game suspension.”

Sophomore Michael Ojemudia will replace Rugamba in the starting lineup. Meanwhile, Ferentz says no decision has been made on a starting quarterback. Sophomore Nathan Stanley and junior Tyler Wiegers continue competing for the job.

“We will have a starter named by Monday at the latest but I am not sure when that decision will be made”, added Ferentz. “The competition remains close and both guys are doing a really good job.”