You are here: Home / Crime / Courts / Lottery schemer sentenced to 25 years in prison 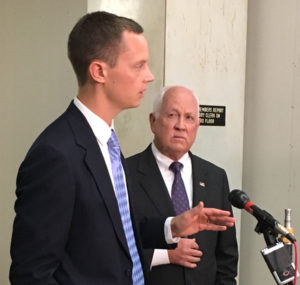 The computer programmer who admits he rigged lottery jackpots in Iowa and four other states was led from a Des Moines courtroom in handcuffs this afternoon. A judge sentenced Eddie Tipton to 25 years in an Iowa prison.

“When you’re an insider who abuses your position of trust and privilege, you should expect to see the inside of a jail cell,” said Iowa Assistant Attorney General Rob Sand, the lead prosecutor on the case. “We’re glad the court agreed and found it appropriate to send Mr. Tipton to prison.”

During today’s sentencing hearing, Tipton told the judge he regrets his actions and the people that he hurt. The judge expressed doubts about Tipton’s sincerity and handed down the maximum sentence for on-going criminal conduct due to the scope of the crime.

Tipton was caught on video buying the winning ticket to a 2010 Hot Lotto jackpot, which someone else tried to claim a year later. A co-worker recognized Tipton in the video. The six-year-long investigation ultimately led to co-conspirators in Texas pleading guilty to claiming other rigged jackpots and now prison time for Tipton, the mastermind of the scheme who had been head of security at the Multi-State Lottery Association.

Terry Rich, the CEO of the Iowa Lottery, told reporters this afternoon that getting a guilty plea was key.

“It was a violation of trust of a third party, a vendor of the Iowa Lottery, so we’re relieved,” Rich said shortly after the sentencing hearing. “We’re thankful and obviously we’re ready to continue to look ahead because there’s always someone trying to beat the system whether it’s credit cards or anything it seems like in this world and we have to be one step ahead and we’re going to do everything we can to be vigilant for that.” 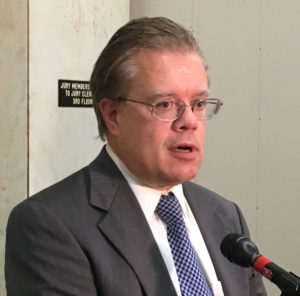 “I think their security protocols that they used and their lack of interest in examining the program that was used to pick these numbers was kind of alarming, really,” Stowers told reporters.

Moments later, the lawyer who prosecuted the case pushed back.

“If you think this has given the Iowa Lottery a black eye, then you don’t know the details,” Sand said. “The only reason any of this happened today is because the Iowa Lottery said: ‘We’re not going to pay this ticket here in Iowa until we are assured that the people who purchased it and everyone who possessed it is not a prohibited player in any way and was acting legally and appropriately.’ That’s the only reason any of this came to light.”

Tipton has been ordered to pay more than $2 million in restitution. Tipton told the judge he’s not sure how he’ll be able to pay it. The prosecutor told reporters Tipton and his co-conspirators have plenty of assets to liquidate.

Tipton’s sister was in the courtroom and spoke with him briefly before Tipton was led away by deputies.