You are here: Home / News / Powerball jackpot is second largest ever 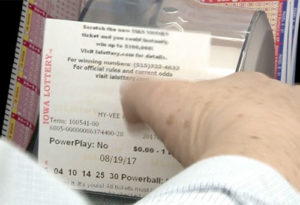 Powerball ticket sales are expected to be brisk for the big drawing.

The prize in tonight’s Powerball drawing has bumped up to $700 million — making it the second largest lottery prize ever offered in North America.

Iowa Lottery spokesperson, Mary Neubauer, says the big number brings in lots of new players hoping to become rich. She reminds everyone to not get carried away.

“You only have to have one ticket to have a shot at it, so please play responsibly, don’t get in over your head,” Neubauer says. “Just make it something fun that you do — like going out to eat or going to a movie — but don’t spend beyond you means I guess would be the bottom line.” She says big jackpots often lead to groups of people buying tickets together.

“When the jackpot gets big like it is now, we do see the pool play phenomenon, the office pool really kick in. Whether it’s folks playing with their neighbors, or maybe with their family, or with their coworkers,” she says. Buying tickets in a group can be fun if you win, but Neubauer says it can also cause problems if you don’t keep track of everything.

“If you’re the person buying the ticket on behalf of the group, maybe make photocopies of the ticket so that everybody in the group knows exactly what tickets were for the group,” Neubauer says. “Keep very close track of who put in money for the purchase of tickets so there’s no question about that later.”

Neubauer says if you purchase tickets for a group and want to buy some for yourself, you should buy them at a different store and different time so it is very clear that those tickets are yours. She says they have several more tips on their website to help you avoid spending the money you won in a jackpot on lawsuits afterwards.

“It’s a fun thing for everybody to be a part of the collective daydream talking about what you would do with the money if you won — but we just don’t want to see it cause complications later,” Neubauer says. There’s a history of success for pool players in Iowa as the winners of the largest Powerball prize claimed here were members of an office pool.

The group all worked together in the shipping department of the Quaker Oats plant in Cedar Rapids when they won a $241 million jackpot in June of 2012. They called themselves the “shipping 20” when they came to collect the jackpot.

Neubauer says strong sales could push the jackpot even higher before the 8:59 p.m. drawing.