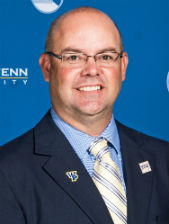 William Penn has become a consistent winner on the football field but the Statesmen want to return tro the NAIA playoffs this season. Coach Todd Hafner’s team finished 7-4 a year ago and won a share of the Heart of America North Division title. But a 29-20 loss to Grand View on the final day of the regular season prevented the Statesmen from earning a spot in the playoffs for the first time since 2012.

“Our expectations are to go win a conference championship and get ourselves in the playoffs”, said Hafner. “If that ever changes than we need to start looking for something else.”

A total of 17 starters return from last year’s team that struggled to an 0-3 start before winning seven consecutive games.

William Penn will be tested right out of the gate. They visit second ranked Baker of Kansas on Saturday, which lost in the championship game of the NAIA playoffs last season.

“They did lose some good players on defense and they lost a couple of good players on offense but they return the national player of the year in their quarterback”, added Hafner. “We will just have to hope we can go in and exectute and give ourselves a chance to win the game.”