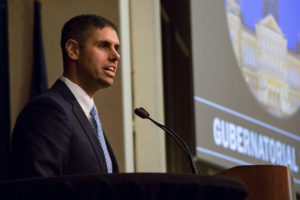 Ten candidates for governor addressed the Iowa Federation of Labor convention today and the seven Democrats, along with a Republican, a Libertarian plus an independent all joined in calling for restoration of union bargaining rights for government workers.

State Senator Nate Boulton of Des Moines touted the endorsements he has from 23 different labor groups.

“We’ll need a Democratic legislature to do it,” said Norris. “This is not a 16-month campaign for governor. This is a three-year campaign to get back control of our state, so we can roll back the collective bargaining change.”

Norris was a top aide to former Democratic office-holders Tom Vilsack, Tom Harkin and Leonard Boswell. Norris and the other candidates each got about 10 minutes on stage. Many of them criticized the $20 million incentive package state officials handed Apple today for construction of two data centers in Waukee. Libertarian Jake Porter said it’s time to end such “backroom deals,” but independent Brent Roske said providing incentives to Apple is “a smart step” that may turn Iowa into a “magnet’ for entrepreneurs.

Republican Governor Kim Reynolds and Cedar Rapids Mayor Ron Corbett, another Republican candidate for governor, did not appear at today’s labor convention in Altoona, but GOP candidate Steven Ray of Boone did. Former Iowa Democratic Party chairwoman Andy McGuire, retired business executive Fred Hubbell of Des Moines and Cathy Glasson of Coralville, a nurse who is a president of her local union were among the roster of Democratic candidates at the event.