A Cedar Rapids city employee brought out a shotgun to the City Services Center Wednesday morning and indicated he wanted to harm himself.

“Police confirmed that no one was injured by the individual. He was however a threat to himself,” Jonker says. “So police officers and negotiators started a dialogue with the individual and were able to convince the man to put down the weapon.”

“The weapon was not discharged during the entire event. Again there were no injuries to visitors employees, police officers or the individual involved,” Jonker says. Jonker says the man was taken to a local hospital for evaluation and his name won’t be released due to the medical privacy law. Police are still investigating to determine if charges will be filed. 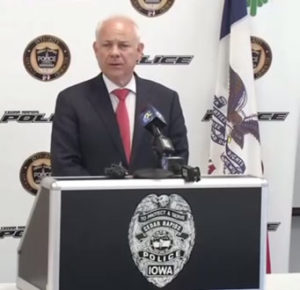 Cedar Rapids City Manager Jeff Pomeranz says the man had been at work and there was no indication that he had any problems.

“The individual early this morning was acting in a completely normal fashion, talking with and meeting with colleagues on work-related matters,” Pomeranz says, “so I say that there were no signs this morning — as well as any signs that we detected previously.” Pomeranz says he doesn’t think anything that happened at work caused the man’s reaction.

He says it is part of the investigation, but they don’t believe it is work related. Pomeranz praised the employees for the handling of the situation as he says there are times where someone might find themselves overwhelmed.

“People find these issues insurmountable and they’re faced with these very, very significant challenges and sometimes there’s a tragic end to that,” according to Pomeranz. “In this case, because of the good work of our police department as well as the response of other law enforcement, and the work of our city employees, there was no injury to the individual or to any other (person).”

Around 375 people work in the City Services Center in a variety of departments from recreation services to the street department.