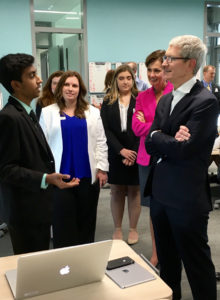 The CEO of one of the world’s largest technology companies was on a whirlwind tour of central Iowa today, announcing his company will spend nearly $1.4 billion to build two new data centers in Waukee.

Apple CEO Tim Cook delivered remarks at a midday event with the governor on the statehouse grounds, then Cook spent more than an hour at a center in Waukee where high schoolers are developing apps and creating other high-tech solutions.

Seventeen-year-old Rohan Gupta told Cook about his projects, including the installation of a new payroll system for a major Ankeny business.

Once Cook moved on to speak with another student, Gupta collapsed into his chair.

“He’s probably where I was when I was in my late 20s in terms of confidence level and the things he can do and that just makes my heart sing,” Cook said of Gupta about half an hour later, “because you know he’s going to be incredibly successful in this fast moving world of ours.” 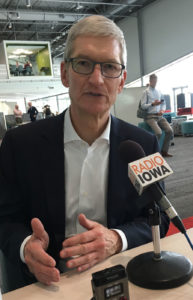 Cook spent about five minutes speaking with 19-year-old Maddie Darveau, a graduate of the “APEX” program Cook was touring. She later described meeting one of the world’s leading tech heads as “mildly terrifying.”

“But I think that everything I’ve learned in APEX has really helped me build the skills to not be completely freaked out,” Darveau said.

Darveau is a junior at Iowa State University now and she calmly handed Cook her business card.

Cook asked questions of the students, knelt to look at computer screens and even brainstormed with a few. He spoke with Radio Iowa afterwards.

“We need this kind of opportunity for every kid in America,” Cook said.

Cook called the program a “jewel” and he told the students they were getting the “gift” of gaining confidence in their skills.

“It doesn’t bother you to stumble, because you know you’re going to get back up,” Cook said as he spoke with Darveau.