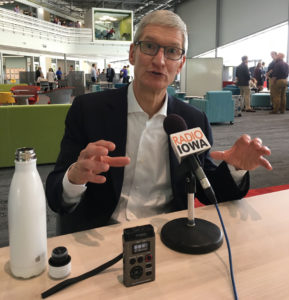 If the energy from wind turbines hadn’t been here, the chief executive of Apple today said his company would not have chosen Iowa as the site for two new data centers.

During an interview with Radio Iowa this afternoon, Apple CEO Tim Cook called renewable energy “paramount” to the decision.

“For us, that’s kind of a gate. If we couldn’t do that, we would not be here,” Cook said. “To Iowa’s credit, Iowa saw this and had the vision to work with the utilities and so forth so it could happen. I think that says a lot about the people here and how they work together.”

Officials with the State of Iowa and the City of Waukee voted to provide more than $200 million dollars worth of tax breaks and other incentives to Apple for the project. Apple will spend nearly $1.4 billion on construction and, once completed, about 50 full-timers will work at the data centers. Critics are already questioning the return on state and local governments’ investment. 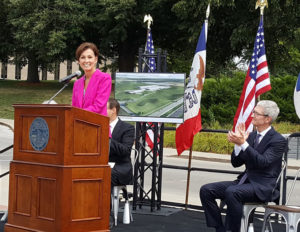 “The thing that’s probably not understood about Apple is we’re the largest taxpayer in the United States,” Cook told Radio Iowa. “…We pay what we owe and, in addition to that, we wanted to contribute to the community.”

Cook pledged Apple will contribute up to $100 million toward public improvements in Waukee, including construction of a new sports complex.

“I’m hoping to personally enjoy it myself and we look forward to growing jobs over time,” Cook said. “There will be a ton of construction jobs in addition. We’re estimating 550 or so initially, but I suspect we’ll be building more buildings as well.”

Today was not Cook’s first visit to Iowa. Cook spent a week in Iowa in the late ’80s or early ’90s, riding his bicycle along the RAGBRAI route.

“That trip made a permanent impression,” said Cook, who did pedal for 100 miles during the “century” day of the ride. “The friendliness, the openness — strangers were inviting you into their home and that just doesn’t happen everywhere.”

Cook was surprised when the governor told him the ride continues to be an annual event and Cook spoke fondly of cycling through small towns in Iowa.

Many of the residents in Iowa’s small towns and rural areas cannot connect to the internet with their Apple devices, however. Cook, who grew up in a community of about 3000 residents, pounded his index finger into the table as he spoke about that lack of connectivity.

“I think that it’s critical that every person in America have broadband — every single one — because, if not, people get left behind,” Cook told Radio Iowa. “And that’s not acceptable.”

Cook indicated Apple’s “current role” in technology deserts is to provide iPads and other devices to more than 100  “underserved schools” around the country. Cook visited an education center in Waukee earlier this afternoon where high schoolers are working on high-tech projects, developing apps and even providing IT services to local companies.

“They inspire me,” Cook said, “and they are the fuel which pushes us to keep innovating and keep creating and pushing the envelope.”