You are here: Home / News / King’s advice to Trump: get a ‘point person’ for the wall (AUDIO) 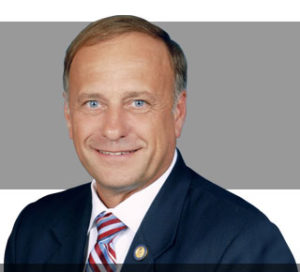 Republican Congressman Steve King today said President Trump should name a “point person” in his administration to take charge of construction of a wall along the southern U.S. border.

“I’m a little concerned about the executive branch’s organization on how to build this wall,” King said during an interview with Radio Iowa.

King is a long-time advocate of building a barrier along the U.S. border with Mexico and has developed his own prototype for the wall. In January, King began meeting with officials in the Department of Homeland Security and the Border Patrol, pressing for answers on construction decisions and a timeline for completion.

“They haven’t delivered me their experts at this point and the message I got back just yesterday or the day before was, ‘Well, all of these documents and all of our plans are confidential, so we can’t give you any answers,” King said. “That won’t work. Steve King’s not going to accept: ‘We’ll keep you in the dark until we decide we want you to know.'”

King suggested Trump’s supporters need public reassurance that progress is being made. A point person to speak publicly about the project is the answer, according to King.

“I don’t think the president knows that he needs a single person in front of this that can answer all questions and speak to the press and drive the wall,” King said. “Coming short of that, it’s going to be hard to build it.”

King envisions this point person as the project manager, heading construction as well. During a speech in Arizona on Tuesday, President Trump called on congress to approve funding for the wall and Trump suggested he’d be willing to shut down the federal government if the $1.6 billion isn’t provided.

“He didn’t say he wasn’t going to promote a shutdown,” King said. “He just wants the funding for the wall.”

Democrats sent out a fundraising message this morning, headlined: No shutdown. No wall.” King said too many of his fellow Republicans in congress want to “over think” the political dynamics.

“Democrats would shut the government down if we don’t fund the abortion factory, Planned Parenthood. Who’s got the strongest principle here?” King said. “The American people voted for and gave a mandate to Donald Trump to build a wall and if he’s not willing to use the power of the presidency to bring about the funding to build that wall, then I think in the end we will have failed to deliver the mandate delivered by the American people.”