You are here: Home / Human Interest / Mother born during eclipse has an eclipse baby 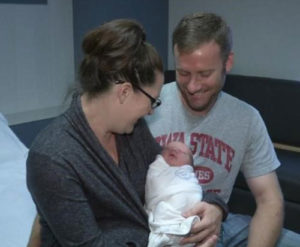 An eastern Iowa woman born during an eclipse 38 years ago gave birth to a baby on Monday, during the latest solar eclipse.

Dawn  and Jonathan Gettler are from South Amana. Dawn told KCRG-TV that baby Clair was actually a few days late.

“We were kind of hoping to have her on the 17th because that’s Jonathan’s birthday, so he kind of wanted a birthday baby, but she held out for Monday the eclipse day,” Dawn Gettler said.

The couple insists they didn’t plan this it all. Dawn Gettler was born during the eclipse that happened on February 26th, 1979. The Gettlers are already talking about traveling to see the next solar eclipse in 2024.