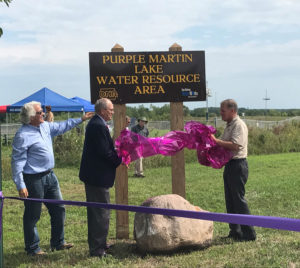 The Iowa Department of Natural Resources announced the opening of a new recreational area Thursday near the Walnut Woods State Park on the edge of Des Moines.

DNR director Chuck Gipp, says the Purple Martin Lake Water Resource Area is a former quarry that has been used as a water supply for the Des Moines Water Works.

He says there’s kayaking and canoeing, bird watching, walking and it is part of the long-term plan to put a bridge across the Raccoon River to give access to the walking trails in Walnut Woods. Gipp says there are currently some fish in the lake.

Gipp says they haven’t decided yet at the DNR if they will stock the lake with fish due to periodic flooding from the Raccoon River that could wash away the stocked fish. “But we might do some intermittent stocking to make sure it is a quality fishing experience,” he says. Gipp says the location of the area allows them to take over its management without having to money to an already tight budget.

“Because it is in close proximity to Walnut Woods State Park it will simply add to the acreage that is under control of Walnut Woods State Park,” Gipp explains. “We currently have one fulltime person there and two seasonals. It will provide a challenge, because they struggle to get everything done in the current park.” Gipp says the area offers a unique bird-watching experience.

He says Walnut Woods park manager Tim Gedler has establish Purple Martin colonies in the area, which where the lake and area got its name. “They come in early April and they leave in August and he said there’s about 138 purple martins that were there this year and more to come the offspring come back for the next season,” Gipp says. “So, it’s become a great bird-watching opportunity as well.” The area will be open daily from 6:00 a.m. until 10:30 p.m.