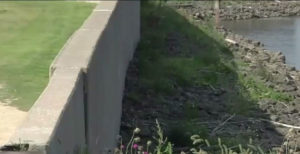 Racist graffiti was found on a flood wall in Dubuque.

Dubuque Police are investigating after a city employee discovered racist graffiti on a flood wall.

Dubuque Human Rights Commissioner Anthony Allen told KCRG-TV while it’s disturbing, but not all that surprising.

“If we’re seeing on the TV and seeing in the media that racial tension is rising, pretty soon it’s gonna hit close to home,” Allen said. “Hate never sleeps. So it’s up to us to always be alert, and be on guard to know that it may happen at anytime, in any community.”

Dubuque Police Lieutenant Scott Baxter told KCRG-TV the graffiti was on the river side of the wall. It referenced the KKK and a racial slur. The area doesn’t have a lot of foot traffic or cameras, according to Baxter.

“We have limited leads based on the location, so it’s very difficult to have a productive investigation without many leads,” Baxter said. He believes whoever did it reached the wall by boat or by climbing down the rocks that are in front of the wall. Dubuque is no stranger to racial issues. In April of 2016, two burned crosses were discovered in a Dubuque neighborhood.

There’ve been no arrests in that case.

Dubuque Mayor Roy Buol issued the following statement:
“A City of Dubuque employee recently discovered racist graffiti on a portion of the floodwall and reported it to the Police Department. While perspective may vary on the significance of this event, it is important that these messages and such behavior be addressed clearly and explicitly. I want to clearly convey that it will not be tolerated in our community. In recent months, our nation has witnessed a resurgence of white supremacist violence that has resulted in murders from Oregon to Virginia, and is more threatening with each passing day. This ideology and these acts cannot become normalized in any way. Like many Americans, members of our community have been impacted by the racist language and violence that has taken place across the country. I am unequivocal in my stand against white supremacy, hate, and bigotry, and recently joined mayors from across the nation in signing the Mayor’s Compact to Combat Hate, Extremism, and Bigotry. Furthermore, I proudly and publicly affirm our fundamental commitment to the values of equity, inclusion, and fairness, all of which are critical to our local and national democracy. These are not only values to which we aspire, they are also values we put into action. In Dubuque, our communities make us strong – people of all races, ethnicities, religions, genders, abilities, and immigration status. Many of our most marginalized communities, however, are facing a larger context of racial inequities across every indicator for success, from education and jobs to housing, criminal justice, health, and wealth. We must continue to work proactively to advance racial equity, developing and implementing policies and practices that work better for all. We must commit time, talent, and treasure to creating new practices and systems to ensure equity and inclusion. There is an ugly history of racism across the United States that continues to play out at times at the local level. We must acknowledge that history, as a nation and as a community, and work to end racism, bigotry, and hate. I know our continued actions are the truest reflection of our commitment to heal our community and nation and make us whole. I am committed to working in partnership to accelerate an equitable future for all.”