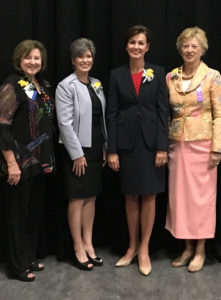 Five women were inducted into the Iowa Women’s Hall of Fame on Saturday, which was the 97th anniversary of the day women gained the right to vote.

Iowa’s first female governor, the first woman from Iowa elected to the U.S. Senate and a woman who’s served on the Des Moines City Council for 24 years were among those honored.

Phyllis Peters of Ames, the chairwoman of the Iowa Commission on the Status of Women, described the group as role models.

“Role models matter today more than ever because young boys and girls are watching and listening,” Peters said.

Governor Kim Reynolds used her acceptance speech to urge women to feel “empowered” to be “fearless, influential and forward-thinking.”

“Change often is driven by girls and women who don’t stop until they get things done,” Reynolds said.

“Growing up on a farm in rural southwest Iowa, my mother always taught me and my siblings that with hard work, the sky was the limit when it came to the difference we could make in our community and even around our world,” Ernst said.

Ernst emphasized the work she’s doing with women in the senate who come from both political parties.

“I have found that often women are able to put politics aside, have an open and frank conversation and work together to find the best path forward,” Ernst said.

Christine Hensley, a member of the Des Moines City Council for 24 years, was also honored Saturday. She spoke about the transformation of the capital city’s central business district.

“We have 40 huge projects in the pipeline for downtown still continuing to move forward,” Hensley said. “Nationally, we have become a model for downtown renaissance.”

The late Jane Boyd, a legendary teacher and social worker in Cedar Rapids, was also inducted into the Iowa Women’s Hall of Fame Saturday.

The Iowa Commission on the Status of Women occasionally awards a “Medal for Equality and Justice” and the co-founder of the Interfaith Alliance of Iowa was honored with it Saturday as well. Alicia Claypool is also the former chair of the Iowa Civil Rights Commission and she recently helped found Iowa Safe Schools, a group that supports students who are lesbian, gay, bisexual or transgender. Claypool turned to Senator Ernst, who was seated on stage, and thanked Ernst for saying in July that if transgender soldiers “can meet the physical training standards” and are willing to defend the country, they should be allowed to serve.

“We hope that you will continue to fight to make sure that transgender service people can serve the country that they love. There is no room for prejudice in our armed services,” Claypool said.

Claypool didn’t shy away from other political hot topics. Claypool denounced the defunding of Planned Parenthood, the privatization of the state-run Medicaid program and the “demonization” of minorities.

“There is much to do. Here are a few suggestions,” Claypool said. “Volunteer for a group whose work is meaningful to you. Volunteer for a campaign. Seek appointment to state boards and commissions. Better yet, run for political office.”

About a dozen protesters who oppose efforts to defund Planned Parenthood gathered outside the event, criticizing the sponsors for including Reynolds and Ernst in the Iowa Women’s Hall of Fame.