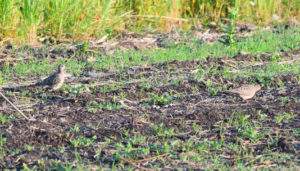 The state’s seventh dove hunting season opens Friday and an Iowa Department of Natural Resources expert says many hunters have probably already been out scouting.

DNR  Wildlife research biologist Todd Bogenschutz says the preliminary work is key in dove hunting. “Definitely when you are thinking about dove hunting — doing some pre-season scouting before the season opens is super important,” Bogenschutz says. “Doves begin migrating out of Iowa usually around mid-August and start heading south and you definitely want to find out which fields they are using and how they are coming in and out of the fields.”

The state plants food plots to draw in the doves, and Bogenschutz says they can often be good areas to hunt. “Sometimes we’re pretty successful and kind of create ideal conditions. Other times mother nature makes it a bit challenging, so even our managed dove plots you want to check out,” according to Bogenschutz. “If you are going to be hunting on private land — whether that is pasture, cut silage fields, small grains fields — definitely pays to check those out too. How many doves are using them.”

The Iowa DNR doesn’t keep official counts of doves, but Bogenschutz says they’ve had some reports as other species are counted.

“We’re hearing from staff they are seeing pretty good numbers when we do the roadside counts, even though they don’t count them there. It looks like our season should be pretty similar to last year and I’m expecting the hunters should do fairly well,” Bogenschutz says. Hunters took 131-thousand doves last season.

“I think that’s one of our highest harvest totals and so we are expecting another good season this year,” Bogenschutz says, “our hunter numbers have stayed relatively stable. We’re right there I think around the 10 to 12 thousand mark for hunters. It’s bounced up a little bit, bounced a little down.” He says the highest population of doves tends to be in southern Iowa.

“When we had some counts through the Fish and Wildlife Service that seemed to show the better numbers down there. I think maybe it’s just a mixture of maybe more pasture down there and maybe some small grains showing up down there. And you’ve got a nice interspersion of landscapes. You’ve got a little bit of hedgerows and those kinds of things rather then when you get up here to central Iowa you’ve can have a lot corn and beans for a long ways and not much else there,” Bogenschutz says.

Dove season is September 1st to November 29th, with a daily bag limit of 15 doves, and possession limit of 45. Legal shooting hours are from one-half hour before sunrise to sunset.