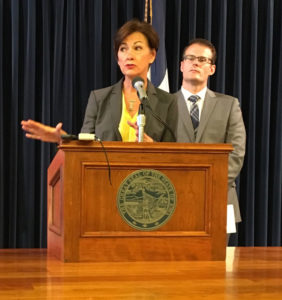 Governor Kim Reynolds says state officials are hoping to free up money so state-employed patients advocates for nursing home residents may travel again, but details of that plan are still in the works, according to the governor.

“I think a lot of their budget, in fact if I remember right almost 90 percent was going to salaries and to administrative costs, and so the interim director that we’re working with I think has some really good ideas about how we can use those resources just a little bit better so that we can do the outreach and do the visits,” Reynolds says, “but do it in a more comprehensive manner.”

According to the Kaiser Family Foundation, more than 24,000 Iowans live in a nursing home. This spring, legislators and former Governor Terry Branstad agreed to cut the budget for the Iowa Longterm Care Ombudsman’s office by half-a-million dollars. As a result, the travel budget has been nearly eliminated for the eight staffers who monitor nursing homes and assisted living facilities and field complaints of abuse and neglect from patients and their families.

Reynolds says she’s “been very encouraged” by alternatives that are being discussed by the agency’s leaders.

“It’s about looking for providing a more efficient government and sometimes that means looking at things differently,” Reynolds says. “…We should continually look for opportunities that we can really provide accountability, making sure we’re taking care of the needs of Iowans.”

Compared to other states, Iowa has far fewer ombudsmen who serve as patient advocates for the residents in nursing homes and assisted living facilities.

(This story has been updated to make clear these are ombudsmen, not inspectors.)