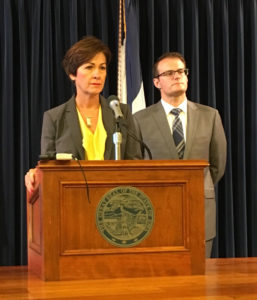 Iowa’s governor says it’s not appropriate for her to address details of the dispute over release of police video from a fatal shooting in Burlington. The Iowa Public Information Board met privately last Friday and took a vote in public on the case, but the board refused to say what it voted upon.

The Des Moines Register filed a formal complaint, accusing the board of failing to comply with state transparency laws. Governor Kim Reynolds is expressing confidence in the board.

“First of all, what happened in Burlington was a tragedy,” Reynolds told reporters during her weekly news conference. “I think what they did was probably legal. It’s under litigation, so I don’t believe it’s appropriate for me to comment on the aspects of it.”

The Public Information Board has been seeking the release of all the police camera footage related to 34-year-old Autumn Steele’s death. She died after a Burlington policeman responding to an alleged domestic dispute shot at a dog and the gunfire hit Steele. Police released 12 seconds of video. Steele’s family and The Burlington Hawk Eye have been seeking release of all the video from the incident.

Reynolds said the Public Information Board is working with the attorney general’s office to determine how to handle the complaint about the board’s actions last Friday and the governor expects an announcement soon.

“It is important that we have an open and transparent government,” Reynolds said.

Some open government advocates have expressed fears that after nearly two-and-a-half years, the Iowa Public Information Board is preparing to drop its push for release of the Burlington police camera footage. The head of the Iowa Freedom of Information Council yesterday said it’s time for the governor and legislators to enact a law spelling out when police video should be released to the public and how long agencies must keep the video.