You are here: Home / Sports / Iowa State looks for better start against UNI 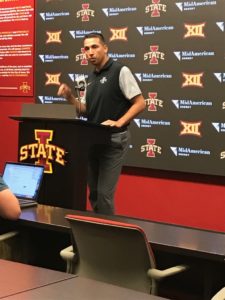 Iowa State played its best football of 2016 at the end of the season and hopes to carry that momentum into Saturday night’s opener against Northern Iowa. The Cyclones were 3-9 a year ago in Matt Campbell’s first season at the helm and one of those losses was to UNI in the opener. Campbell feels his team will be better prepared this time.

“I don’t want to take any credit away from Northern Iowa because they beat us”, said Campbell. “Their kids played really well that night. To say it was our ineptness that allowed Northern Iowa to win is not fair because I though they played a really good game.”

The Panthers are coming off a disapointing 5-6 record a year ago and coach Mark Farley says they are preparing to battle a much better Iowa State team.

“They will be much more prepared and much more experienced than what they were last year”, said Farley. “That changes the dynamics of the game.”