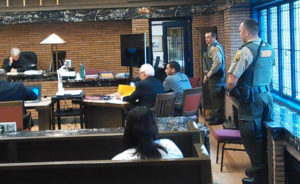 In the courtroom at the Melvin Spencer trial.

A jury found a Sioux City man guilty of attempted murder Monday for shooting at a Woodbury County deputy during a February chase.

Twenty-five-year-old Melvin Spencer was charged after he shot at Woodbury County Deputy Michael Lenz after Lenz tried to stop him in Spencer for a traffic violation. Jurors deliberated part of Friday and most of Monday before reaching the guilty decision. Woodbury County Sheriff Dave Drew was satisfied with the verdict.

Drew says he was “relieved and thankful” for the jury’s verdict and admitted he is not the most patient person. Deputy Lenz was not in the courtroom for the verdict, but Drew called him to tell him the outcome.

“I just wanted to reassure him that he did a great job, he was a good witness. But jurors sometimes really spend a lot of time going over things — though I thought the verdict should be back quicker — it wasn’t anything that anybody had done,” Drew says. Jurors asked at one point Monday to review some of the information and Drew says that’s part of the process and he appreciates them being thorough.

“They looked at some things where they met with the judge, they had questions,” Drew says. “So, I think they obviously spent a great deal of time trying to decide that they got the right verdict.” A sentencing date for Spencer has not yet been set.