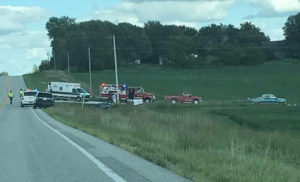 Four people were injured in the accident between a car and an AHST-W school bus.

Two students were among four people hurt in a school bus crash on Tuesday afternoon in southwest Iowa.

Authorities say a car driven by 33-year old Jason Hammond, of Atlantic, collided with the bus from the AHST-W School District around 4:15 P.M.

Sergeant Jason LeMaster, with the Pottawattamie County sheriff’s office, says the bus was driven by 66-year old James Hester, from the Avoca area.

The driver of the car and his son were taken to Cass County Memorial Hospital in Atlantic, where the son was treated for minor injuries before being released.

“When deputies arrived at Cass County to investigate a bit further, they found out Hammond was flown to UNMC in Omaha to be evaluated further,” LeMaster says. “There was two students on the bus that received minor injuries. They were transported to Cass County as well.”

The bus driver was issued a citation for failure to yield.