You are here: Home / Crime / Courts / Massive fire in downtown Exira now investigated as an arson 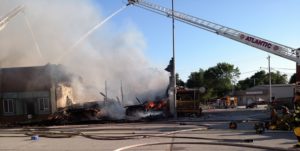 This fire in Exira July 14th is now being called an arson.

The Audubon County Sheriff’s Office is treating the massive July 14th fire in downtown Exira as a criminal investigation.

The sheriff’s office and the Department of Public Safety State Fire Marshal’s Division are leading the investigation that has found the origination point of the fire in Jerry’s Joint Bar. However, they are not yet releasing that information.

They report suspicious facts surrounding the fire and are requesting anyone with information contact the Audubon County Sheriff at 712-563-2631 or the Arson Hotline at 800-532-1459. A financial reward may be available for anyone who provides information leading to a successful arrest and prosecution.

The fire was discovered at the bar on West Washington Street in Exira that Friday at approximately 2:30 a.m. It eventually spread to the west, damaging the Gabby’s and Crabby’s Place gift shop, an apartment and a psychiatrist’s office. A small park breaking up the downtown structures is credited for keeping the fire from spreading further to the west.

No injuries were reported, but there were at least 27 different fire departments and over 70 firefighters brought in to help transfer water and battle the blaze that continued to smolder for days afterward.