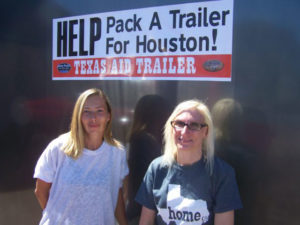 Two northwest Iowa women who have ties to Texas are organizing a “supply drive” to help victims of the flooding in the Lone Star State.

Melba Ter Horst of Remsen says she was prompted to act after hearing about the struggles of relatives in Houston.

“My daughter has a sister in Houston and she told me that she was OK, but she is starting to get water into her apartment,” Ter Horst said. “She wasn’t able to evacuate due to a lack of funds and she mentioned she is starting to run out of diapers for (her) baby.”

Ter Horst’s friend, Joelle  Dutschmann, now calls Le Mars home, but she used to live just southeast of Houston. Dutschmann has many friends and family in the flood zone.

“In order to help fill that void a little bit of not being able to get down there to help family and friends, I figure this is the best thing to do, to help out this way,” Dutschmann said. The women have set up a cargo trailer in Le Mars, where they’re accepting donations for flood victims.

“We’re asking for household cleaning supplies, rubber gloves, paper towels, toilet paper, diapers, formula, wipes,” Ter Horst said. The pair plan to work with churches and other charitable organizations based in Texas to serve as a distribution point. Donations can be dropped off at the cargo trailer, located at Old School Signs on 12th Street Southwest in Le Mars, through 7 p.m. Friday.