You are here: Home / News / Sanders urges supporters to ‘look forward,’ rather than focus on 2016 nominating fight 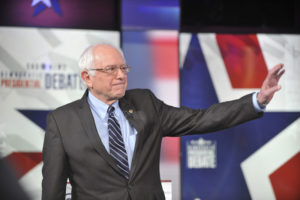 Vermont Senator Bernie Sanders is in Iowa today to promote his new book. The “Bernie Sanders Guide to Political Revolution” is aimed at young readers.

During a midday interview on Iowa Public Radio, Sanders said his aim with the book is to “bring about the transformation of the Democratic Party, which for too many years has been dependent on corporate money, on the money of the wealthy, and to make it into a grassroots party of working people, of young people who are prepared to take on the big money interests and fight for the needs of ordinary Americans.”

Sanders, a Democratic Socialist, said he came “within a whisker of winning” Iowa’s Caucuses last year. Some of his supporters sued the Democratic National Committee for fraud, arguing the nomination was rigged for Hillary Clinton. A judge in Florida recently dismissed the lawsuit. Sanders said during today’s interview that it’s “no great secret” he had to “take on the establishment” in 2016.

“But I think what we have got to do now is look forward and not backwards and what we need to do is continue the political revolution, which is happening all over the country. More and more people are getting involved, running for school board, running for state legislature, running for the congress,” Sanders said on Iowa Public Radio. “…The point right now is with Donald Trump as president, with right-wing extremists controlling the US House and the US Senate, our job is to mobilize people and move forward.”

Sanders, though, said it’s “much too early” to be talking about the next presidential election and whether he may run again in 2020. Sanders is scheduled to address a sold-out crowd of nearly two-thousand tonight at Hancher Auditorium in Iowa City. The event is sponsored by the Prarie Lights Bookstore in Iowa City.