You are here: Home / Sports / Stanley takes over as Iowa hosts Wyoming 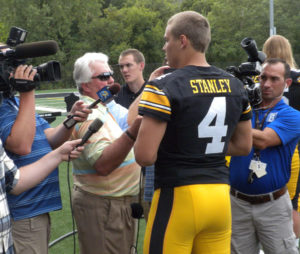 It will be youth against experience at quarterback when the Iowa Hawkeyes open the season at home against Wyoming. It will be the first start for sophomore quarterback Nate Stanley. The native of Wisconsin says he will have more jitters heading into Saturday’s opener than he did last season when an injury to starter C.J. Beathard forced him into action against North Dakota State.

“Because of the anticipation”, said Stanley. “Last year I got thrown in there and did not have much time to think about it.”

Wyoming’s Josh Allen enter his senior season as one of the nation’s top quarterback and is considered a top NFL prospect. The Cowboys finished 8-6 a year ago after a loss to BYU in the Poinsettia Bowl.

“Ever since that bowl game ended and I decided to come back September second is all I have been able to look forward to”, said Allen. “I a very excited to get back on the field with my teammates and show what this team can do.”

With an experienced offensive line and depth at running back the Hawkeyes are expected to lean on the ground game. Iowa coach Kirk Ferentz expects an aggressive Wyoming defense to try and force Stanley to make plays in the passing game.