You are here: Home / Education / Voters will soon decide the future of the Gladbrook-Reinbeck School District 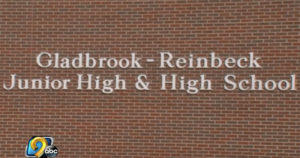 Voters in the Gladbrook-Reinbeck School District are now less than two weeks away from deciding its future. A group of parents gathered enough signatures on a petition to vote to dissolve the district on September 12th.

In Reinbeck there are “Vote No” signs on each corner as the parents of students there are organizing efforts to stop the school district from dissolving. Michelle Keller has two kids in the district. She told KCRG TV the small town atmosphere has allowed her children to thrive.

“The people that they have the elementary district, with the fine teachers that we have , that helped her a lot,” she says. Superintendent David Hill says the elementary schools could go away if the district dissolves.

“That’s a very good chance if the territory of Glabrook-Reinbeck got divided up among the neighboring districts — the neighboring districts may not need any of our buildings open,” Hill says. The whole issue started when the school board decided to close this school in Gladbrook about three years ago. After that decision, many parents in Gladbrook chose to open enroll their students outside of this district. And because of that many parents don’t want their property taxes going to the district anymore.

Mike Bearden is spearheading the movement to dissolve this district. He told KCRG TV he doesn’t have kids that go to the district anymore, but says he’s following the views of other parents in the district.

“Because we wanted our tax dollars to follow our kids,” Bearden says. He says the students will have good options if the Gladbrook-Reinbeck district is dissolved.

“The Glabrook people will go to Green Mountain-Garwin, the Reinbeck people will mostly go to Dike-New Hartford. They’re a very strong district,” according to Bearden. But many parents in Reinbeck like Keller disagree.

“The kids are going to be the ones that have to make the change, not adults,” Keller says. The vote September 12th requires a simple majority to approve the measure to dissolve the district.