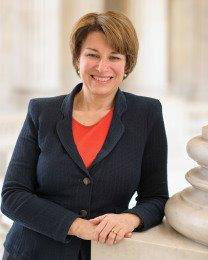 Minnesota Senator Amy Klobuchar told a crowd of more than 800 in Ames last night that women in politics must resist, insist and persist.

Klobuchar argued electing more women will require more than just dwelling on the lack of women in office today.

Klobuchar advised women to “be persistent” and seek “common ground” on political issues, but she acknowledged there is “deep discord” in the country.

“I like to remind so many of my friends, some of which are marching and some of which are in watching TV and putting the blanket over their heads (that) yes, we resist, but we also insist on a better way forward for our country,” Klobuchar said. “And that includes Democrats and Republicans.”

Klobuchar was applauded as she praised the two Republican women in the U.S. Senate who voted down the GOP’s plan to repeal and replace the Affordable Care Act. Klobuchar frequently used humor to drive home a point, like her admission it was hard to raise money in her first senate race in 2006 because she was unknown nationally and her name was hard to pronounce.

“I got all my old address books and I called everyone I knew in my life and I set what is still an all-time Senate record. I raised $17,000 from ex-boyfriends,” Klobuchar said, to waves of laughter. “And as my husband has pointed out, it is not an expanding base.”

Mary Mascher, a Democrat who serves in the Iowa House, was in the crowd last night. She said Klobuchar has presidential potential.

“There’s some star quality there,” Mascher said. “I just think she resonates well with people and has such a great message.”

Barbara Atkins of Ames didn’t know much about Klobuchar before last night.

“Really hit so many different issues that are so important in our country,” Atkins said. “She was really good.”

Atkins said she hadn’t thought about it before, but now would consider Klobuchar as a presidential candidate — if Klobuchar runs. Klobuchar is up for reelection to a third term in the U.S. Senate in 2018.

She is the 30th woman to be invited to Iowa State’s lecture series honoring the late Mary Louise Smith, an Iowa Republican who was the first women to chair a national political party. Klobuchar spoke for nearly 40 minutes, then took questions from the crowd for another 20 minutes.

AUDIO of Klobuchar’s appearance in Ames, 60:00

During the question-and-answer period, one woman from the audience asked Klobuchar about equal pay and family leave policies. During an interview with Radio Iowa after the event, Klobuchar criticized the Trump Administration’s decision to halt an Obama-era rule that would have forced companies to submit pay information sorted by race, ethnicity and gender.

“To continue to support change in this country that’s fair to people, you have to collect the data,” Klobuchar told Radio Iowa.