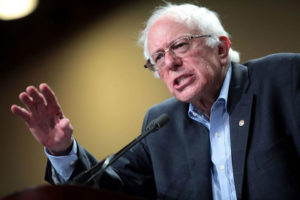 Vermont Senator Bernie Sanders encouraged a crowd of supporters in Iowa City last night to stay involved in politics. Sanders is on a tour, promoting a new book.

“The only antidote to big money control over our political process is when millions of people get involved in every and any way,” Sanders said.

Sanders touched on the familiar themes from his 2016 presidential campaign and he warned the Democratic Party must change or it will continue to lose elections at the state and local level.

His book — “Bernie Sanders Guide to Political Revolution” — is written for teenage readers.