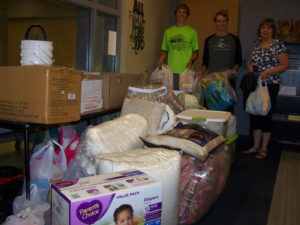 Unity Christian students and a parent dropping off donations.

All kinds of Iowa-based businesses, schools, and organizations are coordinating efforts to aid victims of Hurricane Harvey in Texas.

That includes a semitrailer that will be hauled from Orange City, in northwest Iowa, to a suburb of Houston. Unity Christian High School Principal Wayne Dykstra says a parent who owns the truck and trailer offered to make the trip.

“We’re just excited to see how quick this has mushroomed,” Dyksta said. “And it’s all because a dad said, ‘hey, I’m going to take a truck down there, anyone want to help me load it up?’ It’s amazing how one small decision can spark large involvement from lots of people.”

Local residents will help fill the semi trailer through the holiday weekend before it leaves for Texas on Tuesday. There are some Unity Christian alumni living in the flood zone and they’ve offered suggestions for items that are most needed.

“They’re looking for diapers, baby formula, over the counter medications like Tylenol, blankets, sweatshirts, blankets, and pillows. Those sorts of things,” Dykstra said. The donations will be distributed to a Baptist church located in the Houston suburb of Sugarland, Texas. The railer will be parked at the football game tonight between Sioux Center and Unity Christian in Orange City.