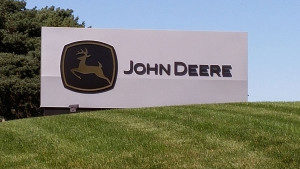 A John Deere executive says expanding U.S. trade is not just important for manufacturers, it’s important for consumers around the globe.

“Today, about 15 or 16 percent of the world population relies on trade to solve their food needs. By 2050, that’s estimated to be north of 50 percent,” says Jim Field, president of John Deere’s Agriculture and Turf Division.

“If you look at the U.S. and you say there’s about 325 million acres of stable cropland and you project forward what is going to be the productivity enhancements and improvements that we would suggest we should see over the next 40 years and then you project forward what’s going to happen with domestic consumption here in the U.S., export has got to be part of the game,” Field says, “because we’re going to overproduce.”

Field says expanding exports of U.S. ag commodities is a security issue as well, since hunger and famine spawn instability. The U.S. currently has “free trade” agreements with 20 of the world’s 195 counties.

Field made his comments earlier this summer at the Iowa Ag Summit in Des Moines.