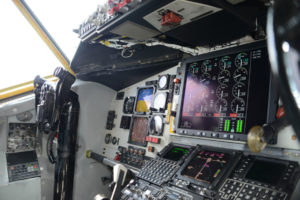 New digital screens in the KC-135.

Sioux City’s 185th Air Refueling Wing has gotten back the first tanker aircraft that has been upgraded with the latest digital cockpit instruments.

Lieutenant Colonel Shawn Streck, 185th Maintenance Commander, says the instrument panel replacement program known as the “block 45” replaces most of the remaining analog gauges in the cockpit of the aging KC-135 with new instrumentation and LCD displays.

He says the jet was built in 1958 and most of the instruments were original to aircraft, so this upgrade puts them on par with the current civilian aircraft. The block 45 program replaces the radio altimeter, autopilot, digital flight director and other gages with computer module updates. Streck says during the next 12 months the 185th expects to have five of its KC-135’s have the new cockpit instruments installed. That should keep the 1950’s era aircraft viable for years to come.

“Our maintainers take amazingly good care of these aircraft. And they’re maintaining them at a level that they will be able to fly until 2040-2050,” Streck says. “So block 45 is a good fit to modernize them to make sure that they can stay at the standard that we want to keep them.” Streck says the new technology means the planes will likely be flying long after he retires. 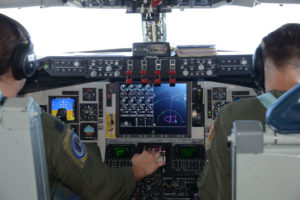 He says he is 43 and plans to retire sometime between when he is 53 and 57. “Unless we get different airplanes, we very well could be flying these same planes 15 years form now. And there could be another generation that takes them 10 or 15 years past that. I would not be surprised to be seeing these tails on this ramp 30 years from now,” Streck says.

The midair refueler returned to Sioux City after 60 days at Tinker Air Force Base in Oklahoma where the new systems were installed.