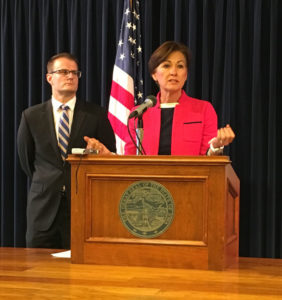 “I am thrilled that he will be the CEO of the new entity,” Reynolds said. “And one of the first things that he told me which is very comforting to me and to the employees of Rockwell Collins is there is very little overlap between Rockwell Collins and United Technologies and so there would be very, very little impact there (and) no impact to the retirees.”

The new company will be called Collins Aerospace Systems. About 8000 people work at Rockwell Collins facilities in Cedar Rapids today. The governor said her conversation with the Iowa native who now leads Rockwell Collins was “very positive.”

“Actually talked about opportunity to bring additional business here, to grow their business here in Iowa and that he is committed to continuing to work with the state as they move through this process,” Reynolds told reporters during her weekly news conference.

There is no decision yet on whether Cedar Rapids or Farmington, Connecticut will serve as the new headquarters after the merger. Rockwell’s Ortberg will be CEO of Collins Aerospace Systems, while United Technologies’ current CEO will serve as president and chief operating officer of the new company.

The deal must be approved by federal regulators. Boeing, the other major player in the aerospace industry, has issued a statement, saying its executives are reviewing the details may ask regulators to “protect” Boeing’s interests and block the deal.