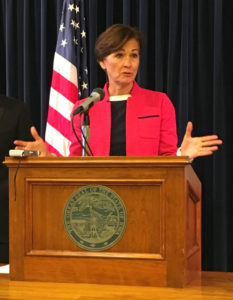 Governor Kim Reynolds today said she supports the Trump Administration’s decision to end protections for young adults brought into the country illegally by their parents when they were children.

Reynolds said after years of stalemate, it’s now up to congress to establish a policy for this group, although Reynolds indicated she is not endorsing any specific plan pending in congress.

“Streamlining the process, giving them some answers, figuring out a way that they could maybe find a pathway to citizenship,” Reynolds said. “I mean, you know, this is where they’ve spent most of their life. They’re working. They’ve gotten an education. I don’t know how reasonable it is to figure out a way to send 800,000 immigrants back.”

According to some estimates, about 3,000 young adults living in Iowa have registered with the federal government through President Obama’s Deferred Action for Childhood Arrivals program.

“These individuals are living in limbo and we need to have congress do their job and address it,” Reynolds said.

Reynolds said securing the border must be “first and foremost” in whatever immigration policy is drafted, but Reynolds said it’s time for congress to “bring some finality” to the entire issue.

Reynolds made her comments this morning during her weekly news conference.

Congressman Steve King has been tweeting about the issue this week. Early this morning King suggested former DACA recipients “will make great Peace Corps volunteers” in their home countries. On Sunday, King warned against the president’s rumored six-month delay in ending DACA. King said it would be political “suicide” for Republicans if the GOP led congress ends up passing some sort of “amnesty” plan that includes a path to citizenship.