You are here: Home / Education / School districts trying everything they can to find bus drivers 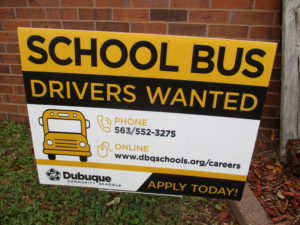 The Dubuque School District is advertising for bus drivers with yard signs.

Iowa school kids are back in class and one of the biggest challenges some districts are facing now is finding enough people to keep wheels on the buses going round and round.

Max Christensen, the executive officer for school transportation at the Iowa Department of Education, says many other states have the same issue.

“From coast-to-coast and border-to-border, there’s concern with trying to fill that seat behind the steering wheel on those school buses,” Christensen says. He says Iowa schools are doing all they can to get out the word.

“A lot of school districts are parking buses in parking lots at malls or grocery stores and that sort of thing and putting banners on them advertising that school bus drivers are wanted,” Christensen says. “One school district in northeast Iowa is using a new tactic that I’ve never seen before…it’s kind of low tech. They are actually using yard signs to advertise for school bus drivers.” 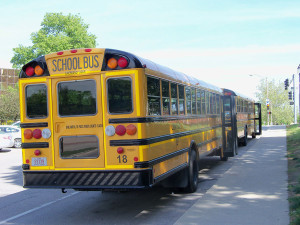 He says they have around 9,000 school bus drivers in the state and around 1,000 leave each year. Christensen admits the challenges involved in driving a school bus may deter some people.

“Being a school bus driver is not an easy task. You are driving down the road with a big vehicle and you’ve quite a number of students behind you — upwards of 40 or 50 students sitting behind you,” Christensen explains. Trying to drive the bus and control the kids at the same time is sometimes somewhat challenging.”

But he says you don’t just hop on the bus and drive away. He says there’s training for you and there’s licensing through the DOT along with drug, background and alcohol tests before you can take the wheel. Bus driving generally requires a split shift in the morning and afternoon, which rules out a lot of people who have other jobs.

He says the driver shortage has caused some districts to offer more pay. “I’ve seen upwards of anywhere from 18 or 19 upwards fo 25 dollars an hour — which is really pretty good money to drive a school bus,” according to Christensen. ” If it works for you, that’s certainly good extra income,” Christensen says.

He suggests you check with your local school district if you might have the interest and time to drive a school bus. “Regardless or where you are at in Iowa, I think just about every district will take a look at you if you want to come in and drive a school bus. The shortage is just that severe,” Christensen says.

“School Bus Fleet” magazine recently reported that a school district in Muncie, Indiana canceled the first two days of school because they had a shortage of bus drivers. The state of Hawaii had to consolidate and eliminate some of its bus routes due to a lack of drivers, as did a school district in Oklahoma.