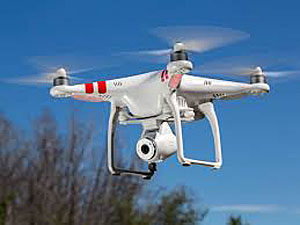 As drones gain in popularity, a team of engineers at Iowa State University is trying to get ahead of likely noise complaints about the unmanned flying machines.

Anupam Sharma, an aerospace engineering professor at ISU, has helped design noise-reduction strategies for airplanes and wind turbines. Drones challenge his team to think on a scale closer to the size of an owl, which flies almost silently.

“At that small scale, the noise signature is a little bit different and the source is a little bit different,” Sharma says. “We believe that at that small scale, the aerodynamic noise is going to be coming from the blades stalling a little bit.” Sharma says it’s the tiny comb-like structure on the edge of an owl’s wing feather that he hopes to imitate to address drone noise. While the small aircraft don’t make as much noise as airplanes or helicopters, Sharma still hopes to reduce the noise they do make.

“They’re going to be much closer to everybody because Amazon is going to start delivering with these drones and whatnot, so they’re going to be in our backyards,” he says. “When they start getting that close to people, that small noise they’re producing is going to be perceptible enough and annoying enough, that we want to do something about it.” Industries from farming to retail to insurance are finding ways drones can help make businesses more profitable. Sharma recently got a half-million dollar federal grant for his work, which is being funded by the National Science Foundation and the Iowa Space Grant Consortium.