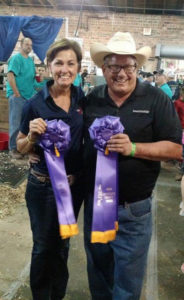 Governor Kim Reynolds is giving no hints about who she may choose as a replacement for Iowa Secretary of Agriculture Bill Northey.

“We have a lot of people under consideration,” Reynolds told reporters Tuesday during her weekly news conference. “…When the time is appropriate, we’ll make that decision.”

President Trump has nominated Northey to be an undersecretary in the U.S. Department of Agriculture, but Northey will not resign from his state post until he’s confirmed by the U.S. Senate for the federal job.

Reynolds pointed to the experience of former Governor Branstad who was named as Trump’s pick for Ambassador to China in December, but didn’t resign as governor until late May when he was confirmed by the U.S. Senate.

“I think history has shown we don’t know what the timeline is,” Reynolds said.

Reynolds expects she’ll have “some time” to consider candidates to fill out the rest of Northey’s current term as secretary of agriculture, which ends in early January of 2019.

“Bill’s done a great job and I’m proud of the work that he’s done,” Reynolds said. “He’s set the bar high and I think anybody that would emulate what Bill has been able to do would be a great person to appoint to that position. We’ve got a lot of qualitifed people, so we’ll do the due diligence on that. When the time is appropriate we’ll make that decision.”

A few state legislators who are farmers are among those rumored to be under consideration for the post, including State Representative Pat Grassley, the grandson of U.S. Senator Chuck Grassley.

The position of state agriculture secretary is not mentioned in Iowa’s constitution and was created 45 years ago by a state law.

Iowa has had just four agriculture secretaries since 1972. Republican Robert Lounsberry, the first elected state ag secretary, served for 24 years, then Democrat Dale Cochran served a dozen years. Democrat Paty Judge was elected in 1998 and served eight years in the post, then Republican Northey was sworn into office on January 2, 2007.