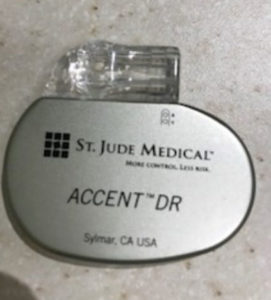 If you are a heart patient with a pacemaker, the Food and Drug Administration has issued a warning about the mini computer that is inside each device.

Unity Point St. Lukes Hospital cardiologist, Doctor Roque Arteaga says the FDA warning is due to the possibility that a computer hacker could interfere with how the pacemaker functions.

“Through the radio frequency signal you can in theory hack into the microprocessor or micro chip of the device and change settings, parameters or even access some of the personal information. All this is theoretical,” Arteaga says. A hacker would have to be within the same room or nearby to be able to interfere with the pacemaker. But as a precaution, the manufacturer has created anti-hacking software that you can download to insure against that possibility.

Doctor Arteaga warns that you should be at a heart clinic to have that procedure done, instead of trying to download the software yourself at home. He says if you are dependent on the pacemaker you should have the software downloaded in the office or at the hospital in case something would go wrong. The doctor says if you are not pacemaker-dependent, you could download the software at home. There have been no reports of pacemakers being hacked anywhere in the country, and the warning is being issued as a preventative measure. The doctor says there is also a risk from downloading the software.

“The manufacturer indicates that even though the software improves the cybersecurity of the device — like any software you are downloading to a computer — it can also make the microprocessor malfunction too. And that is a theoretical possibility too,” according to Arteaga.

He works for St. Luke’s Cardiovascular Associates — which is sending letters explaining the situation to its 140 patients who are included in the pacemaker recall. The alert affects 465,000 pacemakers nationwide.