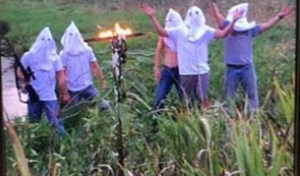 Five players have been kicked off the Creston-Orient Macksburg football team after a photo surfaced on social media showing the Creston teens with white hoods over their heads, standing by a burning cross.

One teen was waving a confederate flag. Another had a gun.

Drake University law professor Mark Kende says as offensive as the photo may be, the school could be over-reaching with its disciplinary action.

“Those kinds of hateful speeches are, because of U.S. Supreme Court decisions, actually considered to be protected speech,” Kende says.

Kende says, as he understands it, the students were not on school property and they were not targeting a specific person. The school, however, has an anti-bullying policy that includes “internet-based communications” and the photo was shared on social media. Professor Kende acknowledges school’s punishment may be justified if the teenagers violated behavior guidelines for students, plus many schools require students in extra-curricular activities to follow codes of conduct.

“But, certainly, there’s a problem in terms of free speech with regard to the discipline that would have to be resolved,” Kende says. “It may be that this is something that these students can, in fact, under some code of conduct be subjected to. But, it’s not clear. What is clear is what they did, under U.S. Supreme Court precedent, would be a form of freedom of expression, so that’s the problem for the school district.”

The Creston News Advertiser has reported the five boys were kicked-off the football team.

“The coach is sort of no different, in some ways, than the school district or the board or whoever makes the decision…and potentially, could be viewed as infringing on their speech rights,” Kende says.

The school’s principal told WHO Television the photo is reminiscent of a “dark past” of “bigotry and hatred” that “does not represent the culture” of the Creston community.