You are here: Home / News / Mountain lion caught on camera in northwest Iowa 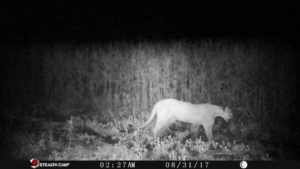 Another mountain lion has been spotted in northwest Iowa — and this time it was captured on camera.

A motion-sensor camera was set up by Aaron Anderson near the town of Linn Grove.

He was hoping to film the movement of deer, but instead he caught a mountain lion in the images. He posted pictures on Facebook, leading to several posts from others who’d heard about the big cats and a couple of reported sightings, including one around the Linn Grove cemetery.

Vince Evelsizer DNR furbearer biologist based in Clear Lake, says he’s also seen the comments from people who want to shoot and kill the animal, but he hopes they won’t.

“They’re not protected in Iowa however, so people can do what they want with them,” Evelsizer says. “Our recommendation is just to leave them be. They’re a wild animal that’s not causing any problems.” Some residents in Buena Vista and Clay counties expressed fears on social media about sending small kids out in rural areas to wait for the school bus. 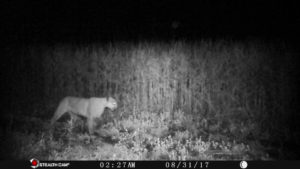 Evelsizer says the children will be fine as cougars generally don’t want anything to do with people.”There’s times when they can be a threat to human safety or livestock but most of the time, mountain lions are not a threat to humans or livestock,” Evelsizer says. “They’re usually really secretive animals that feed on deer and other animals. They’re not something that goes around seeking people usually.”

In late June, a DNR officer killed a female mountain lion that had climbed into a tree on a farm near Galva. The DNR said it was the first confirmed female mountain lion in Iowa in more than a century. The animal was suspected of killing some cattle about 30 miles from where it was found and the agency reported it was only the fourth time a mountain lion had been killed in Iowa.

“It’s good to know that we have a mountain lion or two around and we will continue to monitor them,” Evelsizer says. “I would also say that people don’t really need to feel like they should change their habits. They should continue to enjoy the outdoors. It’s safe to spend time outdoors.” Mountain lions that wander into Iowa generally come from South Dakota and Nebraska, which have natural populations.