You are here: Home / Crime / Courts / Victim identified in I-80 rest stop shooting 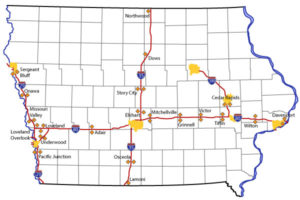 The shooting happened at the rest stop near Victor shown on this DOT map.

A south-central Iowa man has been identified as the victim of a fatal shooting at an Interstate 80 rest area Wednesday.

An Iowa County Sheriff’s deputy who responded to the scene just after 2:30 a.m. found a man who’d been shot to death inside his semi-truck. It happened at the I-80 westbound rest area near Victor.

The victim has now been identified as 60-year-old Ernest Kummer of Monroe.

Forty-three-year-old Mariana Lesnic was arrested at the rest area and is charged with first-degree murder. It’s unclear where she is from and the motive remains under investigation.