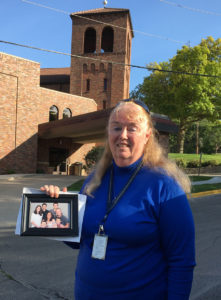 Donna Britt of Des Moines carried a photo of her godchildren into the church.

Iowans have responded with prayers, joy and tears as they’ve seen a “relic” from a Catholic saint who visited Iowa in 1979.

“I walked in and the tears started flowing,” Donna Britt said Thursday as she stood outside St. Anthony Catholic Church in Des Moines, “because I was there when the pope came to Iowa,”

In 1979, Britt was among the throng of more than 350,000 gathered for an outdoor mass at Living History Farms. Britt was overcome with emotion as she saw the shrine in the church set up to display a vial of the late Pope John Paul II’s blood. It’s an “official first class relic” of John Paul, who is now a saint.

“I can still see that helicopter coming over and the pope waving at us and then he came down and, I’ll never forget, he came right up to us and everyone just stood there. I mean, I expected someone to touch him. We all just were in amazement. Every time I saw him after that, I would cry,” Britt said. “And this, I walked in today and as soon as I saw it, the tears started flowing.”

Britt spent an hour in the church.

“It was like being back at Living History Farms all over again,” Britt said. “It’s just amazing. I can feel his presence.”

Britt laid the necklace that was a gift from her late husband and her rosary on top of the relic — a blessing for the items. As a result, those items are considered “third class relics” of John Paul. 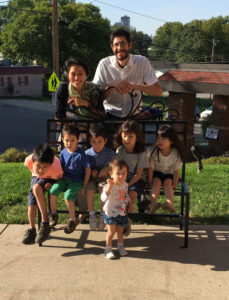 Rachel and Cole Newton posed with their children outside the church.

Cole and Rachel Newton of Ankeny had their wedding rings blessed, then sat in a pew with their six children and prayed.

“We were able to spend time with the relic and ask Saint John Paul II to bless the children and our family and marriage, especially in this time of the world now,” Rachel Newton said and her husband, Cole, added: “How a great a man he was and at a time when the church needed him.”

The couple weren’t sure their young children will remember the event, so they posed for a family photo outside the church.

Students from the adjacent St. Anthony Catholic School filed into the church in shifts to see the relic and 12-year-old Aliyah Villalobos was encouraged to place her hand on the relic.

“Like seeing a once in a life-time thing,” Villalobos said a few hours later. “They had speakers talk about the blood and then we got to ask questions and then go up and see it.”

Hundreds lined up to see the relic at St. Patrick’s Catholic Church in Cedar Rapids on Wednesday. The relic will be on display in four other sites around central Iowa through Sunday. The relic’s final Iowa stop will be at the small, rural parish the pope visited during his trip to Iowa 38 years ago.