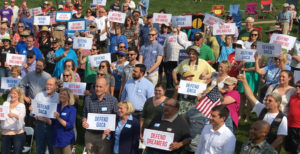 The only Democrat left in Iowa’s congressional delegation says if his party hopes to win back the White House, the work has to start now.

Congressman Dave Loebsack of Iowa City delivered that message to about 250 party activists at an event in Des Moines today.

Loebsack was among a dozen speakers at Progress Iowa’s third annual “Corn Feed” fundraiser. Seven Democrats who are running for governor addressed the crowd. Progress Iowa executive director Matt Sinovic noted nine candidates for Iowa congressional seats were in the crowd as well.

“This is a year when people are fired up,” Sinovic said. “…One of the ways we are seeing this is in how many candidates are running for office, which is a great thing.”

Two potential 2020 presidential candidates capped the event with speeches laying out their ideas for party renewal. Oregon Senator Jeff Merkley told Radio Iowa earlier in the day that his party needs to focus on issues that “smooth the path” for working families.

“We have two big obstacles right now. One is that the economy is rigged and the other is that the political system is rigged, but there is upwelling of progressive energy, wanting to take our country back for…the ‘We, the People,’ vision that we were founded on.”

Merkley arrived in Iowa Saturday, with an aggressive three-day schedule that included a meeting with some of the Iowans who supported Vermont Senator Bernie Sanders in 2016. Merkley laughed when asked if he’d be back in Iowa campaigning for president himself in 2019.

“I just want to focus on 2018 and helping people all over the country,” Merkley said. “…My kids have now graduated from high school. They’re off to college, so Mary and I have more flexibility to be of assistance to others in a battle for the soul of our country and, really, for American leadership in the world.”

Merkley, who was the only U.S. Senator to endorse Bernie Sanders in 2016, supports the “Medicare for All” concept Sanders is advancing, as well as a dramatic expansion of federal spending on the nation’s infrastructure.

The mayor of South Bend, Indiana, also addressed the Sunday afternoon “Corn Feed” crowd. Pete Buttigieg raised his national profile earlier this year with a run to be chairman of the Democratic National Committee. Buttigieg said the Trump presidency is a daily “horror show” but he said Democrats need to “stop treating the presidency like it’s the only office that matters” and start looking at state and local elections.