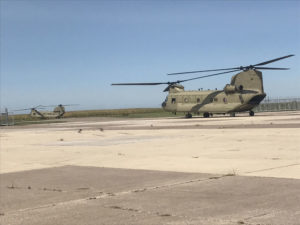 He says two of the helicopters are the CH-47F Chinook helicopters, which are used to lift heavy loads of supplies and people. The other two are LUH-72 Lakota helicopters and are smaller than the Chinooks.

“Which can provide capabilities to show the planners and others what is going in an areas. It’s got sophisticated optics and cameras. It can also help move a few things and people as well. But again, it is a light helicopter,” according to Hapgood. 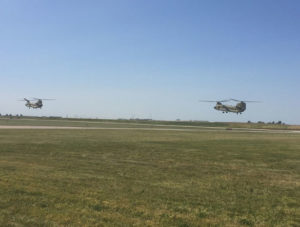 Hapgood says they do not know how long the soldiers from Waterloo, Davenport, Iowa City and Boone may be on hurricane duty. “We did have two helicopters and 11 crewmembers go to Hurricane Harvey, and we expected about two weeks and they were back in 10 days,” Hapgood says. “So we’re hopeful that the situation will be quickly under control on the response part of the hurricane, and our members can come back relatively soon.”

He says each storm is different when it comes to the recovery. “Certainly there is some amount of time that we really don’t know what it till take to get this mission done,” Hapgood says. “What I can tell you from past experience is the State of Florida does a terrific job for hurricanes. They are very efficient at it, very experienced in their response. So we are hopeful that everything will got their way and we can get our crews back here in no time.”

The state of Florida has requested support from Iowa under the Emergency Management Assistance Compact, which is a national, mutual aid and partnership agreement that allows state-to-state assistance during governor-declared or federally-declared emergencies.