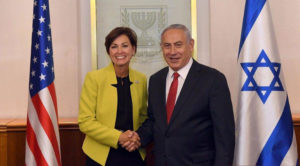 Governor Kim Reynolds today said there are many “potential outcomes” from her trade mission to Israel.

Reynolds and two dozen other Iowans have been in Israel since last Thursday.

“We’ve had the opportunity to meet with numerous Israeli companies that are interested in either investment or trade with Iowa,” she told Iowa reporters during a telephone conference call.

Earlier today, Iowa Economic Development Authority director Debi Durham made a presentation to more than 130 Israelis at a seminar about investing in Iowa.

“Our mission has been both educational and inspirational,” Durham said during the conference call. “And I say inspirational because we are so energized by the collaboration opportunities that have already presented themselves.”

Durham said some of the Israeli executives the delegation has met with called her back a few hours later with more questions. The governor said Joe Longobardi, the founder of Metal Tech Industries in Iowa Falls, told her that he made a “potential sale” on the first day of the trip.

“He just said the trade mission to Israel has really been instrumental for identifying market potential for his products and looking forward to growing (his) business using the connections made on the mission,” Reynolds said.

Six Israeli start-up companies made pitches to the Iowans about potential joint ventures. There’s talk of executives in the medical research field from Iowa and Israel meeting face-to-face again next year. After a meeting with Israel’s prime minister last week, the Iowa delegation met with two Israeli government organizations that promote research and development deals with businesses and educational institutions abroad.

“This visit will, I believe, serve to strengthen Iowa-Israeli business ties for the future and it was just evident throughout the trip how well we really align with innovation and high-tech,” Reynolds said.

Reynolds and Durham had a private meeting with an Israeli company they are “recruiting” to expand in Iowa. The name of the company is not being disclosed. The governor is making a stop in Germany on her way back to Iowa to make a pitch to a company there as well.