You are here: Home / Education / Today is school board election day in Iowa 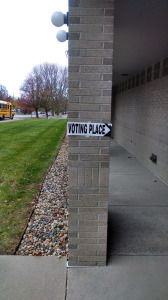 School board elections are being held today, but a small segment of registered voters are expected to participate.

“This year alone we have 330 school districts roughly and over 900 school board positions on the ballot and when you only see four-to-seven percent turnout out to vote for those kind of positions, we can do better,” says Secretary of State Paul Pate, “especially when you think about there are 480,000 K-12 kids in our public schools and it’s 60 percent of our state budget.”

“The write-ins tend to have a higher role in some of these elections that have low turnouts,” Pate says.

According to Pate, most of the people who step forward to serve on a school board tend to have children in the district, “or they just have a real strong bond in wanting to see their education system be up to par.”

School board elections are managed by county auditors. Many school districts extend into more than one county. In those situations, the auditor in the county that has the greatest number of students from the district takes the lead in managing the school board election.

“It’s just like any other normal election, they’ll total ’em up this evening,” Pate says. “Most people, before they go to bed tonight, they’ll know who won the school board elections.”

Precincts open at 7 a.m. and close at 8 p.m. That’s an hour earlier than most elections in Iowa.

Pate mailed in his ballot for the school board election in his home district of Linn-Mar. Pate says the new voter verification procedures for all elections that former Governor Terry Branstad approved this past spring do not go into effect until January.