You are here: Home / Fires/Accidents/Disasters / Update: firefighters work to save Post Office in downtown Newell fire 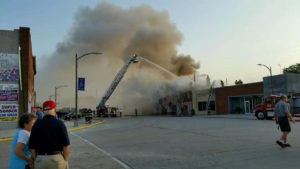 A large fire broke out this morning in downtown Newell in northwest Iowa’s Buena Vista County. Bob Doonan is a longtime Newell resident who lives about a block away from the scene.

“I took my golf cart down…my wife was on a walk and she came home and said there was a fire down there. Someone called it in at 6:30 this morning,” Doonan said.

Fire departments from several surrounding communities responded to the five-alarm fire. Doonan told Radio Iowa the three buildings that were burning were all unoccupied.

According to Doonan, it appears firefighters were able to save the Newell Post Office from much damage. Our post office is abutted right to (the buildings). So, I think that is going to be alright. There is some water inside, I guess,” Doonan said. “In a small town, you don’t want to lose your post office because you don’t get ’em back.”

There have been no reports of injuries and there’s no word yet on what may’ve sparked the fire. Newell is a community of roughly 900 residents located east of Storm Lake.