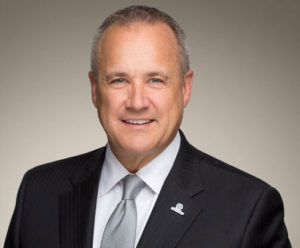 Former Iowa Congressman Jim Nussle today said Iowa’s 94 not-for-profit credit unions have filled a void as banks throughout the country and in Iowa continue to consolidate.

“When I started in congress back in 1990, seems like ages ago now, small community banks made up about 75 percent of the entire marketplace of financial services,” Nussle said. “That’s down to 17 percent today.”

Nussle is president and CEO of the Credit Union National Association. He’s in Des Moines today to address the Iowa Credit Union Convention.

“Credit unions were one of the original disruptors of the marketplace back in 1934,” Nussle said during an interview with Radio Iowa this morning. “We kind of forget about that and so my message to them is don’t be disrupted. Be the disruptor and we’re doing that, I think, in a very positive way for Iowans and for Americans.”

More than 1.1 million Iowans are members of a credit union and the state’s credit unions have about $16 billion in assets, according to Nussle.

“We’re growing,” Nussle said, “which is also something that not all businesses or industries can say these days and we can, which is positive.”

Nussle indicated the “speed of change” and stress in the industry has been rather dramatic, not only because of the “Great Recession,” but because of incidents like Wells Fargo’s admission that its employees created fake accounts without customers’ permission. The recent growth of on-line “peer to peer” lending presents credit unions with an opportunity rather than a challenge, according to Nussle, because credit unions are member-driven.

“We can be that new kind of disruption, which I think many people have interest in, like millennials in particular, but do it in a safe-and-sound and with-a-track-record-to-prove-it sort of way,” Nussle said.

Nussle, a Republican, served 16 years in congress representing northeast Iowa, including a stint as chairman of the House Budget Committee. Nussle said congress appears to be locked in a system right now that’s promoting dysfunction and inaction.

Nussle said he’s reluctant to give advice to current members of congress because he doesn’t have the inside information they may have, but from the outside looking in, Nussle said it appears decisions on issues like health care, immigration, tax reform and infrastructure that could spur economic growth are languishing in congress.

“Have your fight. That’s fine. Have your discussion. Have your debate. People care about this stuff, so they should, but let’s make a decision,” Nussle said. “Let’s have a vote.”

Nussle suggested the polarization in the congress could be addressed if more states adopted Iowa’s non-partisan system for drawing congressional district lines.

“I’m proud of those who decide to serve the public. The vast majority do it, always, for the right reason,” Nussle told Radio Iowa. “…I don’t think it’s the people as much as it’s they’re locked in a system right now that is promoting this dysfunction.”

After running unsuccessfully for governor in 2006, President Bush appointed Nussle to serve as director of the Office of Management and Budget. Nussle has been president and CEO of the Credit Union National Association for three years.