You are here: Home / News / ISU research shows state’s loss of high-skilled workers will slow down 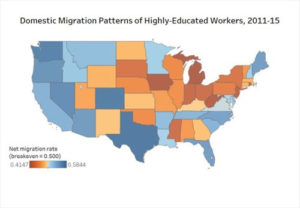 Research by two Iowa State University economists shows Iowa doesn’t have enough high-skilled jobs to keep qualified people from leaving the state — but that is expected to change.

Economist David Swenson studied the situation leads to what some call the “brain drain.”

“The problem in Iowa is that it’s existing industrial structure can’t use all of the people that we educate. Our economy has fewer higher-skilled and higher-educated workers as part of its occupational structure than the national average,” Swenson explains. Nationally around 25.6% of all occupations are filled by people expected to have a bachelor’s degrees or higher compared to 21.4% for Iowa.

Swenson and fellow researcher Liesl  Eathington broke the high skilled positions into three categories — critical basic, problem solving and high level technical — and then tried to find out what they meant to Iowa’s future.

“We wanted to see whether there was going to be reasonable job growth in these categories. And indeed all three of these categories — again critical basic, problem solving and high level technical — were showing reasonable strong growth,” Swenson says. The labor data gave them an yes answer on that question.

“The number of jobs anticipated to grow for people with four-year degrees or more was twice as many as the number of jobs that are anticipated to grow for people who just have something beyond a high school education, but they don’t quite have a bachelors degree,” according to Swenson. He says problem showed itself again when they found that more people have been coming into the state to get jobs than those who are leaving for jobs.

“That’s good for our economy – -but when we sliced and diced that — we found out that we were competitive in terms of people with a high school degree or a little bit of education beyond high school,” Swenson says, “we were very competitive, we had net pluses in that category. But if it was a college degree or if it was on one of those three categories of higher skills, we were net losers in all of those categories in terms of migration over the last five years.”

Swenson says the job landscape will continue to change and impact the current trends. “As we move into the next decade our economy is going to evolve such that it is going to demand and absorb more of those higher skilled workers. And we are not going to be exporting them at quite the high rates that we have been in the last few decades,” Swenson says. He says that paints a bright picture for cutting the brain drain and keeping those who go through the state’s educational system from moving away.

The study finds that nearly half of the projected growth in occupations in high critical basic skills will be in architecture and engineering along with life, physical and social sciences, management occupations, and in health care and related technical jobs.