You are here: Home / Education / Board of Education approves transfer exception for homeless students 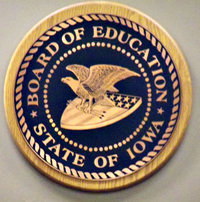 The State Board of Education is moving ahead with a change that creates an exception in transfer rules for homeless students who want to participate in school activities.

The department’s Nicole Proesch says the change brings the state in line with federal regulations.”It’s another way of removing a barrier for a student who is experiencing homelessness, it to allow them to immediately enroll in athletics or other activities in the school district because they are in a homeless status,” Proesch says.

Students who do not meet exceptions to the transfer rule have to sit out 90 consecutive days before they can participate in activities. Proesch says the new rules are part of the McKinney-Vento Act in the federal education bill and will update what Iowa was using.

“Before the rules that we had in place went on a case-by-case basis to kind of review maybe the reason for the homelessness,” Proesch explains. “What we’re looking to do is to kind of remove an extra barrier that a student who is homeless may have.” She says the rules try to take some of the stress away from students.

“There are several ways that a student can be considered a homeless student. A student can be an unaccompanied minor…. maybe not having a fixed place to say at night,”Proesch says. Individual school districts will handle each case.

“Schools and school districts have what they call a homeless schools liaison, and every district is required to have one under McKinney-Vento, ” Proesch says. “That individual is equipped with a homeless toolkit to be equipped with the right questions to ask each individual student or their families to determine whether or not they would qualify as a homeless student.”

The Board of Education approved the proposed rule change and there will be a public hearing will be held on October 31st, , from 9:00 A.M. until 10:00 A.M. in the State Board Room, Second Floor, Grimes State Office Building, East 14th Street and Grand Avenue, Des Moines. Any can give their opinion on the rules either orally or in writing at that time.