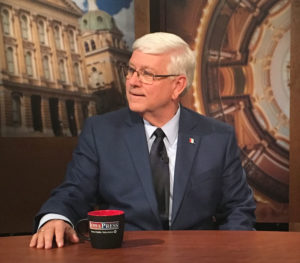 A top state administrator is considering a change that would have state employees conduct the screening for prospective foster parents rather than out-source that work.

Iowa Department of Human Services director Jerry Foxhoven says it’s one of the ideas he’s heard from the employees in his agency.

“And so if their agency is to be paid, their agency must succeed at recruiting and retaining and oftentimes it is taking people they should be passing on,” McCoy says.

Licensed social workers on the state payroll need to be making those calls, according to McCoy. He also suggests there is a “profit motive” involved on the part of some parents who adopt foster kids and get state subsidies.

“If they’re going to receive those kind of subsidies, we need more oversight,” McCoy says. “We need more transparency and we need to ensure they are the type of people we want to entrust these already damaged and abused children with.”

Foxhoven took over as director of the Department of Human Services in mid-June. Foxhoven says if the outsourcing continued, he’s evaluating how to write accountability into the contracts for organizations that screen foster care families.

“To make sure that we get good people,” Foxhoven says.

Foster care parents in West Des Moines and Perry have been charged in connection with the recent deaths of two teenage girls who had been adopted. Both were extremely malnourished. Foxhoven and McCoy discussed the state’s child welfare system during taping of the Iowa Public Television’s “Iowa Press” program that will air tonight at 7 p.m.