You are here: Home / News / Trump gets ‘enthusiastic’ praise at gathering of Iowa Christian conservatives (AUDIO) 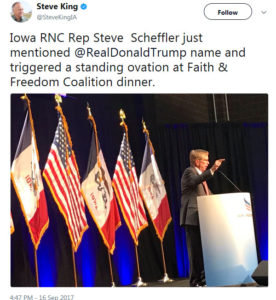 Steve Scheffler, the organization’s president, said since he’s not an elected official, he could speak frankly about the “unhinged…socialist, borderline Marxist” Democrats who he said “are doing everything in their power to destroy America.”

“And also, I have to tell you, I know that he makes mistakes, but I am an enthusiastic, passionate supporter of our great president, President Donald J. Trump,” Scheffler said and the crowd rose to applaud and cheer.

Scheffler added, however, that the people he was “the most disgusted” and “angry with” were Republican senators who have openly questioned Trump’s conservative credentials.

“I’ll just name ’em — Ben Sasse (of Nebraska) and Jeff Flake (of Arizona), who could have a nice conversation with the president, but they want to write books and try to demean him and I’m sick of it and the people that live in those states need to find a primary and take them out and put people there that want to lead and make this country great again.”

The crowd cheered those sentiments as well.

“I want to be crystal clear about what this party and the spokesperson of this party thinks about our president. We will absolutely stand behind President Donald Trump. We will not waiver. He is our president and we are proud of him as the Republican Party of Iowa, period!” Kaufmann said, shouting at the end his sentence, and the crowd rose again to applaud his sentiments.

Congressman Steve King spent part of last week sending warning flares on Twitter after Trump met with the top two Democrats in congress about President Obama’s program that protected young immigrants from deportation. King did not mention immigration or even say the name Donald Trump during his remarks.

King did post a picture of the event’s main organizer on Twitter, mentioning that “Scheffler just mentioned @RealDonaldTrump name and triggered a standing ovation at Faith & Freedom Coalition dinner.”

Iowa’s two Republican U.S. senators spoke at the Saturday night event, too. Senator Chuck Grassley used most of his time on stage to talk about political philosophy and the inspiration for his own governing strategy. Senator Joni Ernst mentioned a few issues, including Trump’s roll-back of federal regulations, like the Waters of the U.S. rule that was unpopular with farmers.

“I am here tonight just to offer you a little bit of inspiration and encouragement because it seems like in the media, all that we hear nowadays is all of the negativity and the controversy, but there have been some really positive steps forward this year. For one, we confirmed a new supreme court justice,” Ernst said, drawing whoops and cheers from the audience.

Oklahoma Senator James Lankford was the event’s keynote speaker. Lankford was a youth pastor for 22 years and he began by talking about leading a Christian youth camp for 15 years before his election to congress.

“Learning how to deal with thousands of juveniles did prepare me better than you would think,” Lankford said, to laughter and applause.

Lankford spent much of his speech, though, urging the crowd of Christians to work “locally and individually” rather than relying upon government to address every societal ill.